…van Wyhe’s annotated edition of The Malay Archipelago offers both interesting material for the general reader and a valuable research aid that will serve Wallace scholars for decades to come.
– Dr. Will Abberley
The Krakatau poem is also a testament to human dignity and courage: brave survivors save lives, strangers care for orphans, and food and money are provided for refugees traveling to Batavia.
– Stephen Joyce, Asian Review

— Avid admirers of Alfred Russel Wallace’s The Malay Archipelago can heave a sigh of collective relief. Since the original edition appeared in 1869, subsequent editions were never thoroughly compared against other contemporary sources, resulting in a number of mistakes and omissions that went unnoticed. Wallace, for example, left many people, places, publications and species unidentiﬁed – this included not only many dates and place names but some of its most memorable stories. He referred to most species only by the scientiﬁc names current in the 19th century, terms that are unintelligible to most readers today. This new edition, retitled The Annotated Malay Archipelago is the ﬁrst fully annotated version to appear in English – editor John van Wyhe provides over 800 footnotes to help the modern reader – a definite improvement over the original edition which had only eight footnotes.

Greatly enriched by an extensive introduction; a detailed itinerary of Wallace’s voyage; explanations that make the book accessible to modern readers, and a full bibliography of related materials – this is the deﬁnitive edition of Wallace’s great work. 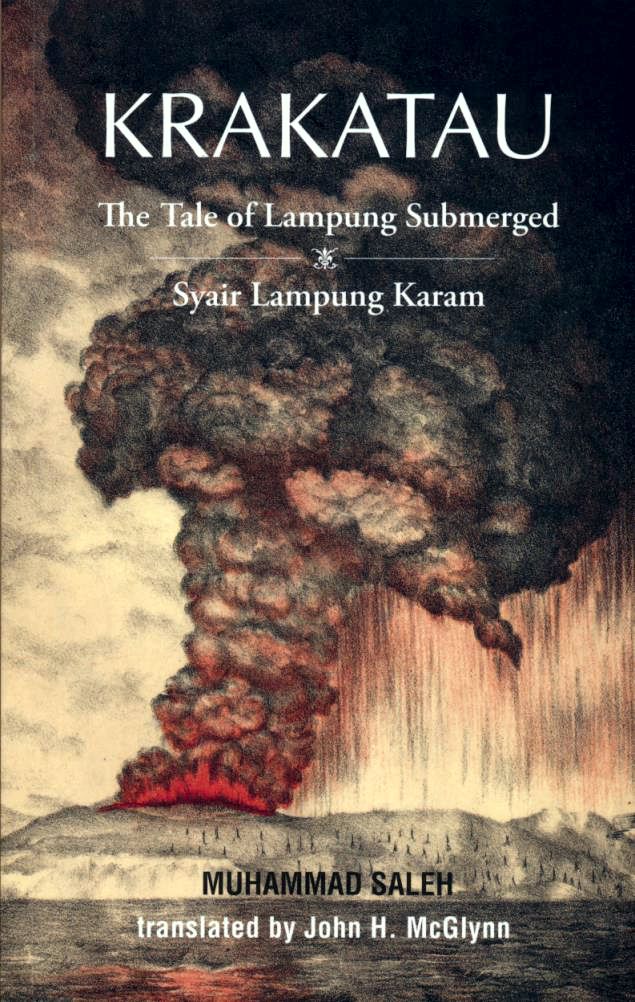 rakatau – The Tale of Lampung Submerged – The only surviving account of the Krakatau volcanic eruption written by a local eyewitness Muhammad Saleh – Syair Lampung Karam – is presented here for the ﬁrst time in an English translation. A resident of southern Sumatra, Muhammad Saleh wrote his account in the form of a syair, a classical Malay rhymed poem. This long narrative poem sheds light on local responses to the widespread devastation in the region and enriches our knowledge of Krakatau. As a Muslim, and in accordance with the tastes of the day, he also offered moral observations and pieces of advice, suggesting that in the face of such an immense natural disaster as the Krakatau eruption, people became increasingly devout and mindful of God.

Syair Lampung Karam appeared in four lithographed editions between 1883 and 1888, with four slightly different titles, published in Singapore. This book is based the last known edition, first published on 16 October 1888. It was translated from the Classical Malay by John H. McGlynn, based on the romanised transliteration by Suryadi and an essay on the syair verse form by Ian Proudfoot and Virginia Hooker. It contains the English translation, the romanised version in Indonesian as well as the original Jawi script.

About the authors: John van Wyhe is a historian of science and one of the world’s leading experts on Charles Darwin and Alfred Russel Wallace. He is a Senior Lecturer in the Department of Biological Sciences and a Fellow of Tembusu College, National University of Singapore. This is his tenth book.

John H. McGlynn is an American editor and translator. In 1987, he co-founded the Lontar Foundation with the aim of promoting Indonesian literature and culture to the international world through the translation of Indonesian literature. McGlynn has translated or edited over 100 works, including translations of several of works by Pramoedya Ananta Toer and is a member of the International Commission of the Indonesian Publishers Association (IKAPI)