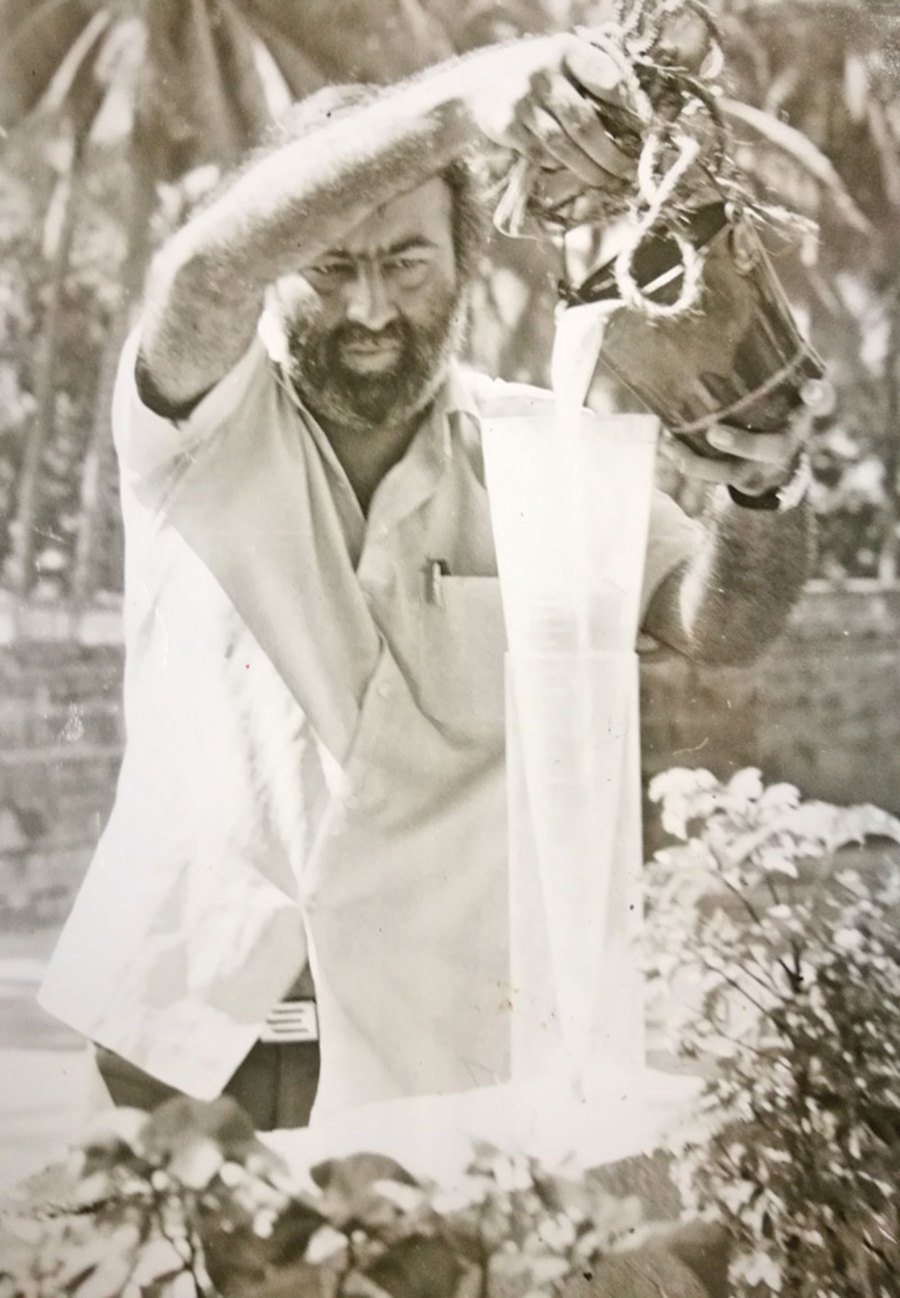 Pouring a sample of river water into a sedimentation cone for measuring silt level, to prove the high levels of pollutants contained in the Klang river, 1981 (NST)

Pressing the doorbell to the headquarters of the Centre for Environment, Technology and Development Malaysia (Cetdem), I’m mentally going over my notes and questions.

The gate opens and the first thing I do is trip over it, narrowly escaping an undignified tumble on the floor. Nervousness brings out the clumsy in me. After being given perfunctory directions to his room (“Go up the stairs and turn to your left”), I wind my way through the dimly-lit house-cum-office, not without some trepidation. After all, I’m about to enter the lair of lion-sized personality, Gurmit Singh.

One of the most productive and best known Malaysian activists of his generation, Gurmit has been the proverbial town crier of the nation’s environmental outlook for decades. He defies easy categorisation: engineer, researcher, human rights advocate and environmentalist long before “going green” became the catchword of current times.

Now, he’s the author of his own autobiography, Memoirs of a Malaysian Eco-Activist, which chronicles his illustrious life from childhood to present-day vociferous environmental crusader.

Well-known for his bluntness and calling a spade for what it is, he once remarked candidly: “Offending parties has never been my intention but if calling a spade a spade offends anyone, so be it. Many of Malaysia’s problems continue to fester because we prevent the development of viable solutions by sweeping them under the carpet on “sensitive” grounds.”

Telling his story
His room is lit by a single LED bulb, and he presides over his table littered with books, files and papers with an authoritative air — very much a commandeer of his own territory — complete with bristling brows that seem to signal woe to anyone who dare encroach on his time and space. He gestures to a seat opposite him where I am to sit.

Congratulating him on the publication of his memoir, I ask whether he’s happy with it. “Well, I can live, with it,” he replies, sounding a little blasé, followed by a self-deprecating laugh. “I’ve always been meaning to write about my life experiences but wondered if anyone would be interested in reading it. I started writing a few years ago off and on, and then at one point I gave up. I only decided to resume when I turned 70 as an attempt to record what I’ve gone through and the lessons I’ve learnt, in the faint hope that someone might benefit from my experiences.”

Gesturing to his computer screen, he shows me a photo which incidentally made the cover of his latest book. It’s a black and white photograph of a man in an ominous-looking gas mask sitting astride the ubiquitous black bicycle popular in the 1970s. A placard in the basket displays the date — June 6, 1979 — World Environment Day. “That’s an iconic picture of me during the time I cycled from Petaling Jaya to Taman Titiwangsa. I raced with a car!” he recalls, not without a little pride.

He explained that Environmental Protection Society Malaysia (EPSM) came up with the idea of cycling a distance of 20km on World Environment Day to prove two points: “One, the traffic in PJ and KL is so bad that even a cyclist can beat a motorist on the road, and two, we wanted to highlight the air pollution.”

So did he beat the car? “Ya. But then again, an old man was driving the car-lah,” he replies tongue-in-cheek.

He discloses he borrowed the gas mask from a friend who was working with a public health institute. “Even back then, the gas mask came off black. That’s why I keep telling cyclists to protect themselves. It’s good to cycle, but do wear a mask because the air pollutants in KL are high, especially if you’re cycling through traffic.”

Born in 1942, Gurmit was a prominent student leader in the 1960s and the 1970s. He got into environmental advocacy by default: “In 1973, a member of the Selangor Graduates Society, which I was involved in, suggested we look into environmental issues in Malaysia. I wasn’t keen because to me, it wasn’t the ‘in’ thing then. Only the westerners were talking about the environment.”

It all changed when they discovered that the Malaysian government had participated in the UN Conference on the Human Environment, better known as the Stockholm Conference, in 1972 and that upon his return, minister Tan Sri Ghazali Shafie was planning to introduce a new law on environmental protection (Environmental Quality Act) in Malaysia. “This galvanised us into action and we decided to form an organisation to address environmental issues. Hence EPSM was born.”

He continues with a smile: “Someone else had agreed to be chairman of the society. However at the inaugural meeting in 1974, he didn’t show up so I became chairman by default!” And the rest, they say, is history — and the beginning of his often tumultuous relationship with the Malaysian authorities.

“It wasn’t easy back in those days. ‘Environment’ was thought to be a dirty word, especially among bureaucrats as it was seen as anti-development and even being termed at one point as anti-national. The foreign minister around that time issued a statement identifying seven thorns in the flesh of the Malaysian government — and I happened to score two as both SGS and EPSM were listed as thorns. That’s why I went on to write a book called A Thorn In The Flesh!” he recalls, chuckling.

He adds, dryly: “I’ve been labelled a trouble-maker on many occasions but that seems to be the fate of those who boldly speak out on views which make the establishment uncomfortable.”

He discloses candidly there were many times he came under the threat of arrest, but it somehow never happened. “Although someone did ring my parents up in Penang and tell them I’d been arrested. They panicked and called me. I assured them by pointing out: ‘I’m answering your call, obviously I’m not arrested!’” he shares, laughing at the memory.

Nevertheless, despite his tense relationship with the government, his prolific activism and dedication to the field of environmentalism got him bestowed the Langkawi Environmental Award in 1993, while in 2003, he was conferred an honorary masters degree from Universiti Pertanian Malaysia (or Universiti Putra Malaysia as it’s known today).

In 2008 he received the Sustainable Consumer award from the Domestic Trade and Consumer Affairs Ministry.

Have there been any positive changes to the environmental outlook since then, I pose.

A pause and he replies: “Some but they’re incremental. You can’t expect overnight changes in environment. If a river is polluted, you have to first find out what’s the cause of the pollution — that takes time. Once you find out the cause, you have to exert pressure to stop the pollutants from entering the river. That’ll also take time. By the time the river clears up, it’ll probably take yet another few years. The ‘cause and effect’ takes a long time and you’ve got to persevere for years before you can actually begin seeing any changes.”

Which is why Gurmit has this advice for up-and-coming environmentalists: “You must be committed and be prepared for the long haul. You won’t get immediate results so you must know how to persevere and not expect immediate gratification. Core environmental issues can’t be solved immediately. As such, you must be able to fight on different levels and form alliances because you won’t be able to fight alone. Be bold enough to speak out and be active in the political process.”

Despite the heightened awareness on green issues today, the 74-year-old Cetdem chairman remains unimpressed: “Go to a supermarket and observe the habits of Malaysian shoppers. Have they changed? Do they read labels and buy ecologically-friendly or even organic products? Are they still using plastic bags?”

Adding, he says: “Some tell me it’s impossible to get things done without appealing to people’s selfishness. I say for the environment, we need to rise above our selfishness. Changing people’s value systems is very difficult. The least anyone can do, or at least I try to do, is to change myself. So I try to live my life with as small an ecological footprint as possible.” Gurmit and his schoolfriends often went on hikes around Penang and even Langkawi and Pulau Jerejak.

Living a simple life needs determination, he maintains, adding that the first step to living a green lifestyle is to reduce one’s consumption.

“Don’t buy too much and refrain from buying unnecessary things. We all have a responsibility to care for the environment, so we need to walk the talk — something I’ve tried to do over the last few decades.”

Emphatically, he continues: “You simply can’t ignore issues like the environment. Whether you like it or not, it’ll come back to you. For example, when you pollute the river, the fishes will eat that pollutant and ultimately you’ll end up eating that fish. Simply speaking, whatever you do to the environment, it’ll come back and hit you. If not you, then your children and subsequently, theirs. In a way, it’s like karma.”

He’s clearly still fired up by the fervour that has powered his involvement in environmental advocacy for more than four decades: “Environmental advocacy is an issue of social justice, human rights and fundamental ethics. It’s not for us to exploit. We have a moral responsibility to protect this fragile web of life on earth for our future generations. We’re merely trustees of what we have today. That’s the key message I hope every Malaysian will take to heart.”

Before leaving, I ask him what he wants Malaysians to remember him as.

He points again to the cover of the book on his computer screen and says: “As a Malaysian eco-activistlah, like my book.” His advancing age hasn’t dimmed his fire at all and I suspect, until his voice fades to a whisper, Gurmit Singh will continue speaking out for the environment. And calling a spade, a spade.

This article first appeared in the New Straits Times on 23 April 2017.

« Maintenance key to addressing environmental issues, says activist
This man has been fighting to save Malaysia’s environment for half a century »