There have been insinuations that Megat Terawis was ‘a soldier of fortune’, someone who would do anything for reward, or that he acquired the ofﬁce of Perak Bendahara by force of arms, as told by R. O. Winstedt and R. Wilkinson in their 1934 work, A History of Perak. The author of this week’s featured book, Megat Terawis: Journey to Our Roots, contends that this description is unlikely. Her search to uncover the history of her famous ancestor involved an extensive research, partially based on a 19th century unauthored manuscript, Salasilah Megat (The Megat Family of Perak), unearthed at the School of Oriental and African Studies of the University of London in 1999. The document showed that Megat Terawis came from the powerful Pagar Ruyung (Pagaruyung) royal lineage whose ancestors can be traced to ‘Raja-Raja Alam Pagar Ruyung, Tanah Minangkabau’.

But who was Megat Terawis? What was his legacy and how did he change the history of Perak, one of the greatest states in Malaysia? The more the writer researched, the more intrigued she became with him. There were many conﬂicting narratives about him. Although it was impossible to ascertain every myth and erroneous story, it became necessary, however, to separate the fact from the ﬁction that had been seamlessly interwoven with history over the ages. He was, for starters, a martial arts master in Kampar in Sumatra, who taught the art of Silat Penjurit-Kepetangan, and a respected ﬁgure in the Malay-Indonesian world. He also traded in gold and tin. 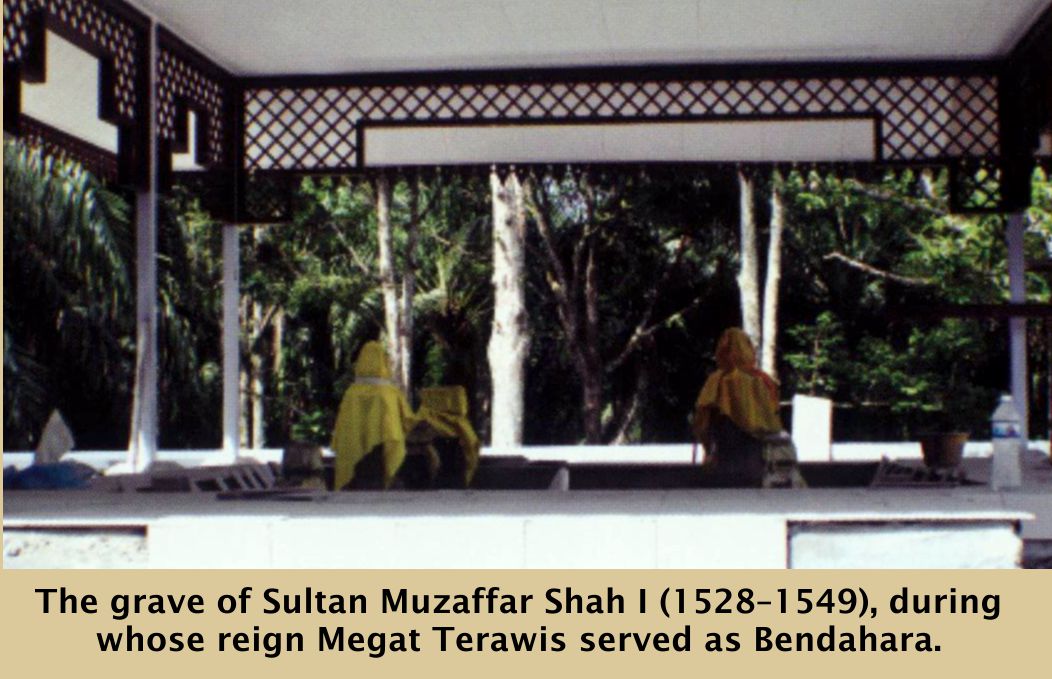 For 230 years, from the establishment of the Perak Sultanate in 1528, the Megats were the Sultans’s Bendaharas – royal custodians, kingmakers and trusted generals, who shed blood for their patrimony. The psyche of a Malay warrior is that he will remain forever loyal to his king, protecting him and ﬁghting for him. One must remember that Mahmud Shah, father of the ﬁrst Perak Sultan, Raja Muda Muzaffar Shah, had speciﬁcally chosen Megat Terawis to accompany and protect his son on the journey to Perak and to ensure his safety in the negeri (state). It was only fitting that Megat Terawis should shoulder this great responsibility and come forward to help end the war between the Perak Sultan and Tun Saban Balik, who had declared himself the independent ruler of Hulu Perak.

The title Megat could not be assumed by just anyone, even if they were of noble blood or were rich or influential. Megat is a customary and hereditary title of princes from the royal line of the Minangkabau Pahryangan (Pariangan). Historically, the Selintas Minangkabau also states that the title Megat or Moghat came from Kota Mahagahat, an ancient city in Aceh, translated as ‘one which was highly honoured’. In 16th century Aceh, the sultans still carried the title Megat or Moghat. Over time, Megat became a hereditary title. In the genealogy of the Megat family, the person who first carried the hereditary title of Megat was Megat Baginda, Tuanku Raja Rao-Rao, the grandfather of Megat Terawis.

About the author: An award-winning writer, Putri Zanina Megat Zainuddin’s narration reveals the impact of the powerful Bendahara Megats on the history of Perak and also the Malay-Indonesian world of old. A thirteenth-generation descendant of Megat Terawis, her book combines the author’s travelogue, historical accounts and genealogies of the Megat family as well as folk tales and legends that lend intrigue to one of Perak’s most prominent aristocratic families.

Other titles you will find interesting: Raja Bilah and the Mandailings in Perak: 1875-1911. This story focusses on Raja Bilah, who harnessed the energies of Chinese miners as well as Sumatran migrants to make Papan the leading tin-mining town of its day. Kampung-Kampung Tersohor: Di Sepanjang Sungai Perak (Famous Villages Along The Perak River). This book reminds locals, academics and tourists of the ‘forgotten riverside settlements’ that were, and still are, a crucial part of Perak’s history, and still offer much to those willing to seek them out.