In commemoration of Dr Sun Yat Sen’s 150th birthday on 12 November 2016, the Sun Yat Sen Museum Penang is proud to present the new Road To Dawn《夜‧明》commemorative DVD (2016), a 2007 Chinese historical film depicting an episode in the great leader’s revolutionary life, when he sought refuge in Penang from July to December 1910. Shot exclusively on location in Penang under the direction of Hong Kong filmmaker Derek Chiu, the film has garnered several prestigious international awards. International film star Winston Chao helms the lead role, ably supported by a talented cast comprising local and foreign actors, including ​Lee Sin Chet, Wu Yue, Zhao Zheng and Vickey Liu. Some of Penang’s historic locations were featured prominently in the movie, in addition to several local personalities and members of the public who were cast in minor roles and as extras. 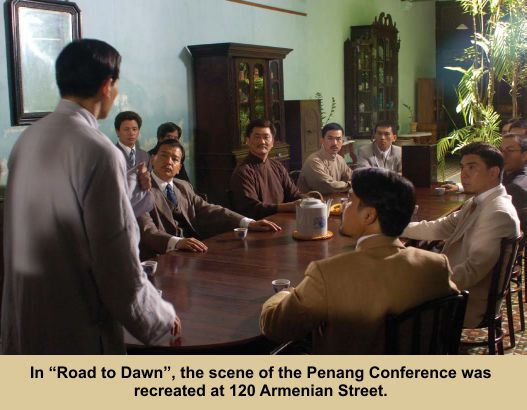 This newly reissued and unabridged DVD will be on sale at the Sun Yat Sen Museum Penang, 120 Armenian Street, as well as Areca Books. The disc features Mandarin audio with Chinese, English and Malay subtitles, an aspect ratio of 16:9 (widescreen) with special bonus featurettes. Proceeds from the sale of the DVD will go towards the restoration and maintenance of the historic (circa 1880) Sun Yat Sen Museum at 120 Armenian Street, as well as various cultural and educational projects.

Dr Sun Yat Sen (12 November 1866–12 March 1925) was a Chinese revolutionary, physician, first president and founding father of modern China. Considered to be one of its greatest leaders, his political life was one of constant struggle and frequent exile. After the success of the revolution, he led successive revolutionary governments as a challenge to the warlords who controlled much of the nation.

Synopsis: After his ninth failed attempt to stage a revolution in China, Dr Sun Yat Sen alias Sun Wen (Winston Chao) is once more a political exile with a price on his head. Turned away from Japan, he sails to the Nanyang.

In the tropical island of Penang, Dr Sun continues to raise funds for the Chinese Revolution while staying at the luxurious home of Penang businessman Xu Boheng (Wang Jian Cheng). Xu’s beautiful daughter, Xu Dang Rong (Lee Sin Chet) is a feisty Nyonya lady. Her life changes when she meets Dr Sun at the grand birthday celebration for her mother Mrs Xu (Vickey Liu). Xu Dan Rong’s father is forcing her to marry the son of his British business friend, although she really loves Lou Zhaoling (Zhao Zheng). Unknown to her, Lou is a Qing secret agent who has received an order to kill Dr Sun. Meanwhile, Dr Sun’s second wife, Chen Cui Fen (Wu Yue) has just arrived to join him. She tries to thwart the assassin…