Beautifully painted and brilliantly decorated, rickshaws are a defining feature of Dhaka; turning the City of Mosques into a city of rickshaws. 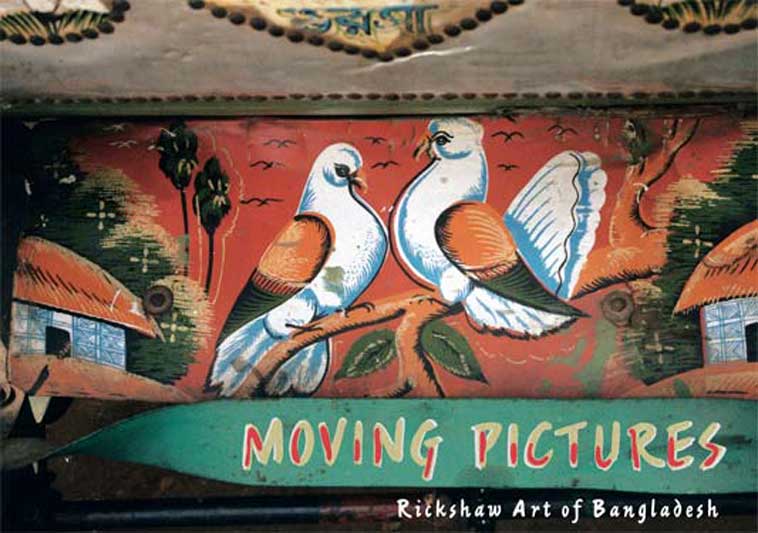 Rickshaws and their counterparts are a common sight in some Asian countries like the Philippines, Thailand, Malaysia and Bangladesh. Although the flat terrain of Bangladesh is suitable for bicycles, people prefer to commute by cycle rickshaws, a mode of public transport which swiftly replaced the horse drawn carriage after the Partition. Auto rickshaws appeared in 1980. Actual numbers vary bewilderingly, and there are anything from 100,000 to 500,000 of these vehicles on the road.

The decorated rickshaws of Bangladesh, compared to those found in other countries, is a unique feature of Dhaka’s cultural landscape.  Urban popular, folk art, pop art, modern folk art, animal scenes, natural scenes, movie themes, human faces and vehicles are some of the common themes employed . “Some of these pictures are rooted in the history or culture, or some represent the desires of the artists” explains the author,  and they usually feature “a special blend of Islamic, rural and Bengali artistic traditions.”  The artists are called mistris, usually male but not always so. One such well known artists is Syed Ahmed Hussain whose paintings have been utilised in a calendar by the German Embassy and are still seen travelling on Dhaka roads. Rickshaw art has been acquired by the German and Australian embassies and exhibited in Britain and Japan.

The title of the book, Moving Pictures: The Rickshaw Art of Bangladesh, is an apt nod towards a unique form of mobile art. As authors Kuntala Lahiri-Dutt and David Williams put it: “the pictures painted on the rickshaws that are never static, always going somewhere or waiting to go, giving us a glimpse of the busy urban folk life.”