Provides a fascinating persepctive on Chulias in Penang…with evocative images that sharply capture their Indianness and Islamic cosmopolitanism. 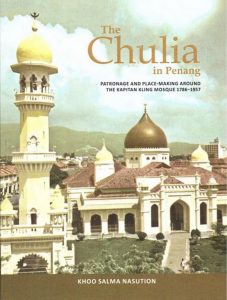 Areca Books is happy to announce a new publication The Chulia in Penang, a cornerstone study on the history of a significant South Indian community. The book is on sale at Areca Books, and for a very limited time, in Kuala Lumpur at the International Conference on Humanities and Social Sciences at ESTCON 2014, Kuala Lumpur Convention Centre, 3-5 June.

Tamil Muslims – once known as Chulias – prospered as traders of pelikat cloth, pepper and local products in the Straits of Malacca. In the nineteenth century, they enriched the port town of Penang with endowments for mosques, Sufi shrines, burial grounds, a water tank and an ashurkhanah, holding religious feasts and processions. The most valuable endowment in the Straits Settlements was that for a mosque and burial ground in George Town, granted in 1801 by the English East India Company. On this site, a South Indian vernacular mosque was founded by the leader of the Chulias, Kapitan Kling Cauder Mohuddeen, a Marakkayar shipowner, merchant and progenitor of the ‘Merican’ clan. In the early twentieth century, the colonial government enacted an ordinance to take back the lands and modernize the townscape. In the process, they co-opted the traditional leadership and refashioned the mosque into a grand Indo-Saracenic symbol of British patronage over its Muslim subjects. The Chulias excelled as Malay scribes, clerks and land surveyors, and also as ship chandlers, stevedores and lighter owners in the port industry. Educated in English, Malay and Islamic schools, the local-born Chulias, called Jawi Pekan or Jawi Peranakan, became part of the cosmopolitan Muslim elite. They innovated the performing arts of Boria and Bangsawan and pioneered early Malay and Tamil print media in Penang, which helped give birth to modern vernacular discourses. Influenced by the Khilafat and Self-Respect Movements in India, they strengthened Tamil identity and started Tamil schools. For economic and political reasons, they formed the Muslim Merchants Society, the Muslim Mahajana Sabha and then the Muslim League, the last of which competed in Penang’s city and settlement elections in the 1950s. The book looks at how this diaspora community – living under the East India Company, then in the Straits Settlements and British Malaya – evolved in response to the changing terms of colonial patronage.