View cart “Beyond the Sea” has been added to your cart. 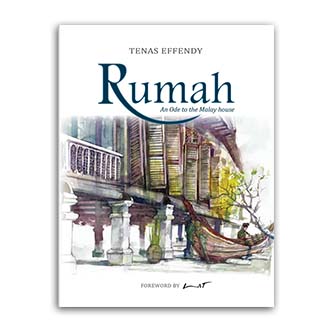 Rumah: An Ode to the Malay House

Rumah is a collection  of old Riau–Malay rhymed  sayings  originally  gathered  and published  by Tenas Effendy. Referred to in Malay literature as ‘Ungkapan’, these eloquent stanzas depict the Malay house as a metaphor for the passage of life, the responsibilities of parenthood, the social observances  of  communal  living,  and  the  obligations  of  existing  harmoniously  with  nature. Together, they form a complex work that vividly illustrates the values of customary law, etiquette, cultural protocols and religious tenets as cherished within a Malay home. The sayings themselves beautifully  capture  and radiate  the warmth  of  a  graceful  Malay  kampung house  cast within the idyllic setting of a lush tropical oasis. Rumah has been elegantly translated by Raimy Ché-­Ross and richly illustrated by Ahmad Harun.

‘‘Peruse RUMAH and appreciate the thousand and one meanings within its pages . . .’’  – Lat

Tenas Effendy once said that a house should not only be a place to live in, but it should also exemplify the perfection of life. The traditional Riau–Malay house, as eloquently expressed by him in this poem, represents these tender aspirations: the imparting of traditional mores and customs from wise elders to the young, the demarcation and respect for living spaces, the obligations owed by parents towards the education of their children within the safe, nurturing confines of a home, and the bonds of communal living within an agrarian society. Above all, the physical structure of a Riau–Malay house is a tangible manifestation and constant symbol of our place in both the temporal and spiritual realms. Through his poetic presentation of these ancient pearls of wisdom, Tenas Effendy reminds us that only by truly understanding the deeper meanings behind the symbols and nuances so lovingly crafted into its surface can we appreciate the Riau–Malay house as a timeless, living home. 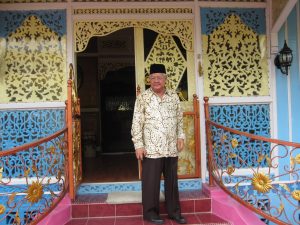 Raimy Ché-Ross
Born in a rumah sakit, raised in a rumah pangsa and settled in a rumah teres, Raimy Ché-Ross is an accredited Malay translator whose writings explore little known aspects of Malay arts and literature. He teaches Malay while engaged in translation and voice-over assignments in Melbourne, Sydney and Canberra. He divides his time between his rumah hinggap in Woden and his rumah keluarga in Selayang.

Ahmad Harun
Ahmad Harun is a Malaysian-born, London-based part-time artist. The medium for his works are watercolour, acrylic and oil. Born in Sungai Petani, Kedah, he acquired his architectural background at Universiti Teknologi Malaysia, then gained his Part II in RIBA (Royal Institute of British Architects) in Oxford Brookes University, Oxford, UK, in 2006. He is currently a full time visualization artist working with an architectural firm based in London. Ahmad subscribes to the philosophy that ‘Art gives our creative soul the food it needs to realize dreams and hopes’.

Ode to the Abode. At the heart of the traditional Malay house are architectural genius and age-old wisdom. Feature story in Travel 3Sixty, Air Asia

Rumah, An Ode to the Malay House

Malaysian cartoonist Datuk Mohammad Nor Khalid, better known as Lat, was guest of honour at the launch held at the Kuala Lumpur Gallery in March 2014. In his speech Lat described the traditional Malay house as a cultural icon, and that the younger generation should remember and hold on to the tradition that makes up this homegrown identity. Lat also provided an illustration to the book.

Architect and ecologist Datuk Dr Ken Yeang, who spearheaded the book, said the traditional Malay house was a cultural icon that was in danger of being a forgotten relic amongst the high-rise apartments, contemporary bungalows and terrace houses.Guests at the launch also enjoyed the framed illustrations by London-based illustrator Ahmad Harun whose watercolor works were used to accompany the poem. 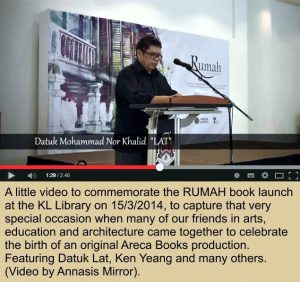 More on the book:

There are no reviews yet.

Be the first to review “Rumah: An Ode to the Malay House” Cancel reply