View cart “Little India of George Town” has been added to your cart. 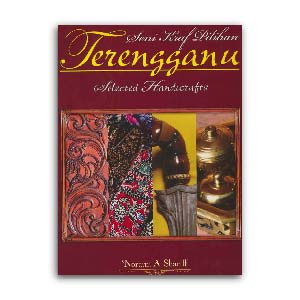 Terengganu: Selected Handicrafts features the heritage crafts, including wood carving, block printed batik,  brassware and ironware of the East Coast state. These crafts possess their own identity and legacy which are unique to Terengganu. Unfortunately, there are not any practitioners who are willing to invest their efforts in these industries. These crafts which are based on centuries-old traditions are now losing their appeal. As such, the programmes and efforts by the Sultan Mizan Royal Foundation to revive these crafts are most timely and laudable.  This book focuses on tour selected heritage crafts which are the pride of Terengganu – wood carving, batik block printing, brassware and ironware. This crafts are the inherited legacies and identities which have been handed down through the generations. They began as cottage industries, eventually becoming known for the quality of work and creativity of their makers. These industries were at their peak before but yet have lost many of their craftsmen and promoters. In an effort to revive the craftsmanship of these heritage crafts, the Sultan Mizan Royal Foundation has taken the initiative of providing the space, infrastructure, training and technical as well as financial assistance to those involved. These efforts have now borne fruit. This bilingual book, in Malay and English, documents a landmark achievement for the Foundation in its efforts to rejuvenate the heritage crafts of Terengganu.

About the author: Noraini A. Shariff, MA  (Communication) graduated  with a BA in Mass Communication  (Journalism) from Universiti Teknologi  MARA (then known as lnstitut Teknologi MARA) in 1980. She worked for a short  while in the national news agency,  Bernama, before joining The New Straits Times as a journalist. Eighteen years later, she decided to switch tracks into  teaching and became a part-time lecturer at several public and private universities where she taught journalism. Today, she is a fulltime lecturer at the Faculty of Artistic  and Creative Technology, Universiti Teknologi MARA, her alma mater, and enjoys lecturing tremendously, not least  tor having the chance to meet young  minds.