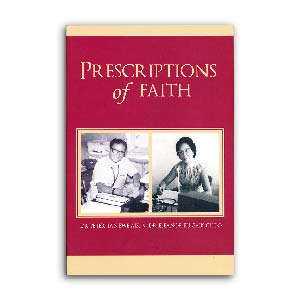 Unknown to each other, authors Eu Gaik Choo from Kuala Lumpur and Tan Ewe Aik from Penang left to pursue tertiary studies in Hong Kong in 1939 and 1941 respectively, each choosing to study medicine, out of a desire to help people. Prescriptions of Faith depicts how their own individual characters developed over the years, describing at length their experiences growing up in the uncertain political climate during the tumultuous period of the mid-twentieth century. In these two intertwined autobiographies, the reader finds heartfelt testimonies of faith, sacrifice and contributions to making life more meaningful.

Excerpts from the Forewords

“A story of compassion, a reminder that besides skills and knowledge, medicine is essentially a humane and humanistic profession.” Professor Chan Li Chong

Dr Eleanor Eu Gaik Choo was born on 8 March 1921 in Kuala Lumpur. She left for Hong Kong in 1939 to pursue her medical studies. Nine years later, she met Tan Ewe Aik, also a practicing medical student. They married on 9 June 1951 at Hong Kong’s St Joseph’s Church. Dr Peter Tan Ewe Aik was born three years later than his future wife, on 2 November 1924 in Penang. His mother was a Straits-born Nyonya. Over the years, both doctors have made numerous contributions to their country.