View cart “City Eye on George Town (English edition)” has been added to your cart. 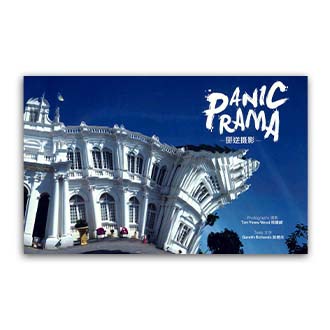 For his new book, Tan Yeow Wooi’s method is bolder. In some ways the new images are the antithesis of his previous work, as he sought to displace autonomous moments with the possibilities of photographic narrative. Inspired by the design of extended photographic spreads in magazines and landscape scroll painting – long established in East Asian an as a means to develop the storytelling potential of art – Tan set about creating huge collages. These are panoramas that capture what Henri Lefebvre calls the ‘diverse, speciﬁc rhythms of everyday life’.

Taken over a period of three months, the images also offer a sense of change over time –  just as he intuited that the character of historic George Town itself was irrevocably changing. The images of the ‘everyday’ –  residential shophouses, eating places, people going about their business –  are commingled with striking shots of buildings that represent, or so they appear, solidity and continuity: temples, clan houses, street corners. What is remarkable in these panoramas is that they understand the urban world as much more than a simple agglomeration of people and buildings and things in space. They offer a sense of people making their own spaces. A production and reproduction over time.

The narrative here feels more like an ‘ongoing moment’, with the elongated format of the panoramas allowing the viewer to skip across a range of subjects, seemingly unconnected, and yet all inhabiting the same streetscapes. The photographs presented in Panicrama offer a completely new way of looking at apparently familiar urbanscapes.

Tan’s novel approach is radically different, creating a clear disjuncture in his own visual language. There are all kinds of inﬂuences at play here. From the world of painting, Tan points to stylistic afﬁnities with cubism – that optimistic and revolutionary movement from over a century ago. Here, then, was a pictorial idiom that captured Tan’s more radical imaginings – taking the seeming monumentality and ﬁxity of architectural forms and breaking them down into fragmentary and fragile elements from overlapping viewpoints. (excerpted from the introduction by Gareth Richards)

Architect Tan Yeow Wooi’s new book,Panicrama, also came about as a result of a ‘fortuitous accident’ which occurred during the course of a conventional photo shoot. (From our newsletter)