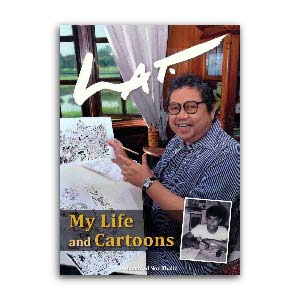 Lat: My Life and Cartoons is the entertaining and surprisingly poignant memoir of Mohammad Nor Khalid (to give Lat his real name). Packed full of riotous high jinks, fascinating personal anecdotes, and a colourful cast of friends, family members and acquaintances, the book also tells the true stories behind his most famous works: The Kampung Boy, Town Boy and Mat Som. From a childhood spent in army camps, the city and the kampung, through his early success as a cartoonist and his experience as a reporter in 1970s Kuala Lumpur, Lat tells in his own words the revealing story of his life and work. Accompanying the narratives are photographs and illustrations from his personal archive.

Lat also shines a light on how Malaysia, the world and his craft have changed over more than half a century. Already a commercially published cartoonist at the age of 13, Lat has gone on to achieve celebrity status and won the hearts and attention of millions with his inimitable style, wit and perceptive insights. Along the way, he shares fascinating accounts of his travels to the UK, US, Japan and beyond, the fulfilment of his long-held ambition to bring his work to life in animations and a multitude of other media, the inﬂuences on his work, his dedication to his profession, his passion for music and the importance of his relationships with friends, family and fellow cartoonists.

About the author: Mohammad Nor Khalid, far better known as Lat, is Malaysia’s foremost cartoonist. He has captured the country’s characters and soul for more than 50 years in editorial cartoons, books  and animations.  His best-selling book, The Kampung Boy, was hailed by Simpsons creator Matt Groening as ‘one  of the all-time great cartoon books. Kampung Boy has been in  print for more than 30 years and translated into nine languages. An award-winning animated series of the same name has been broadcast in many countries around the world.