View cart “Kearifan Tradisional Pulau Pinang” has been added to your cart. 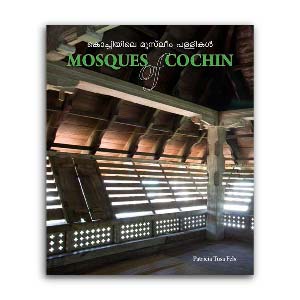 Cochin – a historic port city on the Malabar Coast in Kerala – has for centuries remained a centre of maritime trade along the Indian Ocean. These commercial contacts brought with them the earliest influences of Christianity, Judaism and Islam to India, resulting in a cosmopolitan mosaic of people in the region. Against this backdrop, some of the very first mosques were built in India, located in compounds replete with coconut palms. These tropical mosques reveal a distinctive legacy in form, acknowledging and celebrating the place, history and building techniques of the region.

Mosques of Cochin documents the surviving vernacular mosques, which stand as powerful and visible expressions of Islam’s integration into the culture of Malabar. Many of these fine old mosques have recently been demolished or remodeled, and replaced by uninspiring concrete structures. In highlighting the beauty and historical importance of the mosque architecture of Kerala, the book aims at bringing greater recognition to these remarkable structures.

“A truly stunning achievement. Beautifully photographed and elegantly designed, this book takes one into the traditional mosques of Cochin. And through images of surpassing beauty, it conveys the simple and primordial power of vernacular architecture… and the context in which it exists.” Charles Correa

“Fels has made a compelling case for the importance of these old mosques toward the social, historical and architectural continuity of Cochin. I hope this work changes the way people view and value these incredible buildings. It is a book worth reading, while pondering on the role of history in the changing environments of urban India. It is well-researched, eloquently written and beautifully illustrated.” Manish Chalana, Assistant Professor (Urban Design and Planning), University of Washington

Patricia Tusa Fels is an architect and historic preservationist. She has been involved in conservation projects in the United States, Europe and Asia for thirty years. In addition to a lengthy career in architecture, she has written articles for a wide range of journals and newspapers. Her research on the mosques of Cochin was sponsored by the Ford Foundation.

Conservation as a Part of the 21st Century
Acknowledgements
Bibliography