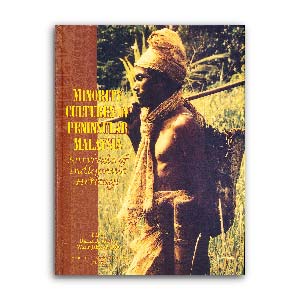 Aslian cultures continue to undergo many ideological and economic changes, and are increasingly endangered with the threat or inevitability of greater globalisation. As the anthropologist feels increasingly powerless to control the tide of events leading to the destruction of the diversity of these communities, every small attempt to provide new light on the lives of these fragile cultures deserves some merit. The reader is dedicated to discussing a wide range of issues, from cultural history to ethnozoology, of the Peninsular Indigenous minority cultures, in hopes of preserving their heritage and survival. Scholars from all over the world contribute to this collection of well-researched articles.

Razha Rashid is a cultural anthropologist and Associate Professor of anthropology at Universiti Sains Malaysia. He has for several years now been conducting research on one of the smallest Orang Asli communities in the world, the Kintak Bong, who now number less than 200. Razha is also one of the pioneers of the Orang Asli Ecology Project in Universiti Sains Malaysia. His research has been published in many journals spanning over 40 years.

Dato’ Datin Dr Wazir Jahan Karim  has conducted extensive research on indigenous minorities in Penunsular Malaysia and women in politics, culture and religion. She has authored and edited several books on cultural minorities, Islam and women, including Emotions of Culture: A Malay Perspective; Women and Culture: Between Malay Adat and Islam and Women, Cultural Minorities of Peninsular Malaysia. She was a professorial fellow of Clare Hall, Cambridge and is currently a Life Member. Most recently, she is the founder of the Jawi Peranakan Society.